Karlsruhe Open – from a participants view

Karlsruhe Open – from a participants view 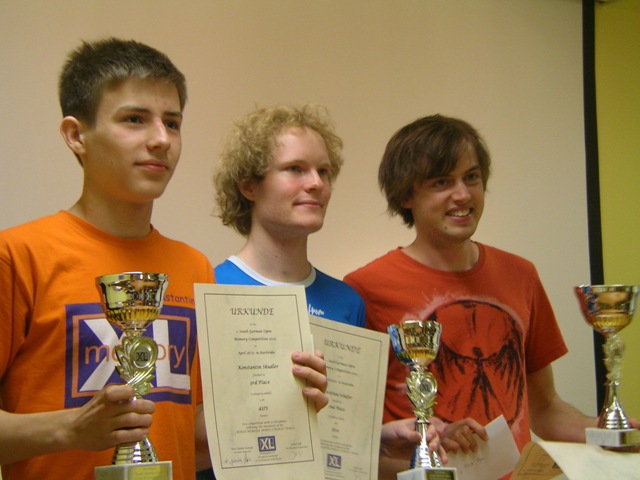 My journey to Karlsruhe was more exciting then I’d planned for. Just some days before my arrival at the Baden-Baden airport I realised that I’d done a stupid mistake. I hadn’t realised that the three extra disciplines of the open championship would be held on Friday instead of everything being held on Saturday, so my airplane would arrive (if on time) 14:30 at the airport, only one and a half hour before the competition would start. Add at least forty minutes of travel time to the venue and possible delays in traffic and the margin was getting uncomfortably narrow.

Luckily everything went extremely smooth and I arrived at the hotel where the competition would be held with lots of time over and was even the first competitor to enter the competition room. It was bright with big windows and birds singing outside of the of them. Lovely!

Second competitor to arrive was the Danish Søren Damtoft whom I had met a couple of times before. He seems to be in a constant great mood which always reminds me that the best thing about memory competitions is how fun they are! Also joining the Danish troop were Magnus Dam Nørgaard whom I’d met in Sweden once and his father Leif who had just started training. Memory sports is growing slowly but steadily in the north.
Another new face in the competition room was Roy Bernabela from the Netherlands who apart from being a very nice guy also did an excellent first competition and broke seven national records! I suspect that we will see great battles over the Netherlandic high scores between Rick, Hein and Roy in competitions to come.
Everyone having said hi to each other we started with 15 minute numbers, the first of the three additional disciplines of the open, the other ones being spoken numbers and 10 minute cards. My usual strategy is to try to get as good a score as possible in each of the disciplines, but this time the conditions were a bit different. After the competition I was going to stay for a week with my good friends and fellow memory athletes Christian Schäfer and Annalena Fischer (both who participated in the championship, Christian in the open with me and Annalena in the regional) in their flat in Würzburg. This of course gave them some power over me and Christian told me that they had decided that my food supply during the week might be “limited” if I did to well (= beat him) in the competition… Given this I first thought about memorising upside-down or something to slow down my pace but then I figured that the price money would be enough to buy good food anyway so I kept to my original strategy of doing my best. (Just to be sure to avoid misconceptions: They were of course joking; I got very good food and had a great week with them in Würzburg!)
The disciplines of the first day all went good for me (even though my underwater spoken numbers training didn’t seem to have had much effect) and I had a nice little lead on Christian when we left the competition room in the evening and went to eat a tasty buffet before going to sleep. Malte Godbersen whom I’d met at the WMC last year entertained us with fascinating stories of German television programs (which I would find out the following week to be just as entertaining as he described them!).

Day 2
For some reason I always have trouble sleeping the night before a competition, even though I’m usually not that nervous anymore. This night I woke up after four hours and then spent the following four hours trying to go back to sleep, without result. Not a good start of the day but after having taken an ice cold shower, eaten a robust breakfast and talked to Simon (Reinhard) who said that he sometimes performs better when he has slept bad because he then knows that he will have to put in some extra focus I felt quite good and strolled happily down the stairs of the hotel to meet up with Christian and Annalena outside of the competition room.

There I also met another German mental athlete who the day before had introduced himself to me as Dennis and told me that he was back into memory sports after some years away from it. At first I was shocked. Could this be the for me legendary Dennis Müller whose Online Memory Challenge results (among them 1206 binary digits in 5 minutes while trying 1800, 170 words in 5 minute words while trying 200 and one deck of cards in 14.81 seconds…) I hade gazed upon so many times?? He seemed to be the right age! I simply had to ask for his surname. He told me it was… Proksch. It felt pretty good that Dennis was Dennis Proksch and not Dennis Müller (even if it of course would be very interesting to meet Dennis Müller as well) and also he was very nice to talk to!
The disciplines of the second day were presented and watched over mainly by Gaby Kappus who did a splendid job, making the rules very clear in a both humoristic and reasonable way which made everything go exemplary smooth. I kept on performing pretty well but so did Christian and we had veeery close fights in some of the disciplines, like 94.5-91 in historic dates and 403-402(!) in abstract images, both won by Christian! I kept leading all the way up until the final discipline though, but when it comes to speed cards nothing’s ever safe. I had quite a good lead so I could’ve gone safe and been relatively sure of victory but it’s such a dull way of ending a competition and at this point it didn’t matter so much to me anyway since I was battling a friend and either way I had an exciting week with Annalena and Christian to look forward to! Also I could smell the 7000 point line which I had been aiming for for a while and just beyond that Christian’s and Ben’s 5th and 4th positions on the world rankings. It was definitely worth a try. I went all in and aimed for a sub-40 time in the first trial but became a bit nervous and also felt awkward with holding the cards over the table (at home I always practise with the cards just above my lap to be sure of having the same position every time) so it took me 50 seconds to go through the deck and I had an error already on the second card… Christian on the other hand did it in about 42 seconds – an excellent time! – and as usual it was all down to the last trial.

I got permission from Gaby to hold the cards over my lap with a judge standing right behind me. My palms were sweating as usual and I thought that maybe I should bring climbing chalk next time. This time it went much better. I got a bit slow in the middle and landed on 52 seconds but I got them all right and was immidiately congratulated by Christian and Annalena (who smashed her competition and became the new South German Champion!). After having called home and had my brother calculate my final score it stood clear that I had also barely past Christian on the world rankings (with a mere 16 points…). I think that this will be good motivatation for him to try and climb over me again!
Overall it was a really great competition with nice participants and well-organised arbiters and I was happy to receive my first trophy-looking memory trophy which looks very good on the shelf back home. Most happy was I of course to meet old and new memory friends during this pleasant weekend in Karlsruhe and to come with Christian and Annalena on more adventures the week after that. I’m already looking forward to the German Championship in July with great anticipation!